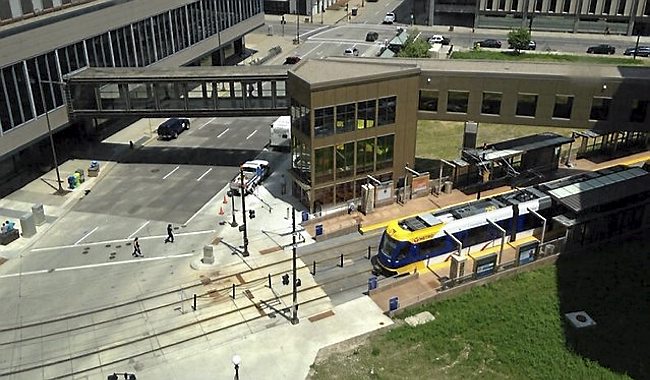 It is a legitimate question to ask the current crop of candidates for Mayor:  “How will you encourage and expand business in downtown St. Paul.”

Given that Councilmember Noecker represents downtown St. Paul  I suspect that she is looking for all the help – and answers – she can get on how exactly to do that.

Here are a few ideas that I have that may be kind of “out there” but sometimes I like to really bend the edges of the envelope.

Such as, well, you know, picking up the garbage in Ward Two and listening to the neighbors who plead to have the garbage picked up.

Remember that huge, awful hazardous waste site on the corner of 10th and Wacouta in St. Paul?

That one.  The one with empty and full syringes.  Rats.  Exposed drainpipes that could spell the end of a child.  Filth, disease and other unpleasant stuff.

If you aren’t committed to the notion that a clean downtown is a safe downtown you’re already losing the battle for encouraging businesses to expand downtown.

Support  your police department in maintaining safety and order in the Central Business District.

Certainly business that is looking to come to a downtown business district is looking for it to be a safe and welcoming place for its employees.   If you can’t ensure that business and its employees and customers feel safe during the day – or at night – it likely means you aren’t going to look at downtown St. Paul as the number one choice for relocation, expansion or even to start your business.

Providing more officers, and making it clear that you support their efforts on the streets, and in the skyways, is a remarkably easy thing to do.

You just have to make sure your City Attorney’s Office is prepared to work with your police department in charging and prosecuting quality of life crimes that impact both the perception and reality of safety in downtown St. Paul.

You do, of course, have to come up with the funds to hire more officers and officers that reflect the growing diversity of our St. Paul community.

The City has no shortage of money to spend.  It’s simply a matter of how they prioritize the spending of those existing dollars in the years ahead.

Of course, implementing policies that will make skyways a safe means of transportation in downtown St. Paul.

What could be done about the lack of cleanliness, consistency and convenience of the skyways?  Or, even the notion of them being safe and welcoming for anybody who lives, works or visits St. Paul?

Again, there is no shortage of money for the City of St. Paul to spend.  It’s a matter or prioritizing where one spends the money.  More police officers that reflect the growing diversity of our City throughout St. Paul ought to be a top priority for any candidate for Mayor in 2017.

City Officials and the Metropolitan Council need to engage in a way that eliminates the artificial divide between the jobs and duties of their police departments.   Both entities are supported by taxpayers.  Both entities should have the same common goal of maintaining safety for all taxpayers — whether they are using Metro Transit or the streets and skyways of downtown St. Paul.

We should also put an end to the increased level of panhandling in downtown St. Paul could be a great place to start.

Nobody is doing anybody any favors by turning the other way and ignoring panhandling in downtown St. Paul.

Panhandling is a crime.  It should be treated as such.  It doesn’t mean we should be picking up every panhandler and throwing them in jail, but it does mean we have to enforce the law.

Many cities are implementing policies that are cracking down on panhandling while at the same time creating new opportunities for those engaged with panhandling.  Let’s examine those policies and see what is working.  Let’s try them in St. Paul and see if they work or if we can improve and enhance them to work for our City.

The reality is those who are suffering from mental illness, chronic homelessness or other factors that deprive them of living a life safe from fear, want and suffering need our help in ways far more impactful and sustainable then having them standing on street corners begging for money.

I would suggest that it is far more cruel and intolerable to allow those with mental illness and other life-limiting factors to stand out on a street corner as a sign of our tolerance and compassion than it is to get them off the street and get them the help, services and support they truly need to have a successful life.

I know that these are just a few things that challenge the sustainability of the current businesses in St. Paul.

They also challenge the notion that any additional outside companies are going to invest significant resources in the downtown without addressing these issues.

Yes.  There is a new baseball stadium – a refurbished use of the old Macy’s building – and a number of new restaurants in downtown St. Paul.  All of these are great things and the public and private sector that made it possible should be commended for their efforts.

But, it would be a foolish proposition to suggest  we have no need to focus  more time, effort and resources on making downtown St. Paul safe, clean and affordable.

Being unwilling to confront the fact that people find downtown skyways and streets unsafe – that panhandlers are becoming more aggressive to guests and employees – means you cannot be truly serious about how one can “…encourage and expand business downtown.”

None of these ideas are rocket science.  None of them haven’t been advanced or proposed by others over the years.

Yet, none of them will happen unless there is leadership in the Mayor’s Office to make it happen.

Let’s hope that over the weeks and months ahead we start to see and hear more of these types of ideas and approaches from those seeking to lead our City for the next four years.