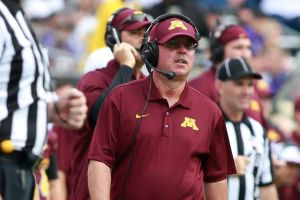 His announcement today that he is stepping down, immediately, as Coach of the University of Minnesota Golden Gopher’s Football Team is another profile in courage for this man.

I remember the first times that Kill had seizures along the sidelines of football games and imagining just how scary that had to be for him and his family. I remember seeing some of the images of this grown man lying on the ground while frantic coaches, players and medical personnel rushed to his aid.

From that moment on there were stories and commentary from all quarters about the wisdom of having him continue to serve as the Coach of the University of Minnesota Gopher’s football team.

To me there should have never been a question. This man belonged on the sidelines – Coaching.

It would have been easy for the University of Minnesota to join the chorus of those who were calling for sidelining him permanently. I have no doubt there were powerful voices demanding that the Coach be replaced, that his illness was standing in the way of football glory and victory.

That the University of Minnesota rejected those voices and those thoughts and stood by and behind their Coach and his family is something that should not be lost upon Minnesotans. It is the best of that institution. It reflects well on all of us that we support an academic institution that put its values ahead of its standings in the college football rankings.

Jerry Kill reminded me of someone else, though, when his very public struggle with epilepsy interrupted his life and career.

It brought me back almost 40 years ago to a small town in North Dakota and a young man, barely a man, named Alan.

Alan was my best friend. We were full of life. He was funny, quirky, kind and a farm boy through and through. Alan loved music. He was quiet but could be as rowdy and loud as any boy his age. I spent the best parts of my teen years with Alan.

Then, without warning, Alan had a seizure. And more seizures. It became obvious that it was Epilepsy and Alan suddenly became more quiet, subdued and withdrawn.

As kids we didn’t know much about Epilepsy. We knew that it resulted in seizures and when they happened they were terrifying.

For Alan they were draining. Emotionally, physically and spiritually.

In the late 1970’s there wasn’t a lot of support and understanding and knowledge of epilepsy for young people like Alan. In the small town of Fairmount most of us had no idea what we were supposed to do, or not do.

Alan used to love to come to school dances, but the prospect of a seizure in the middle of his classmates while they were dancing, with a strobe light flashing, had him stop coming to those things that he loved to do.

Then, one day, disaster struck for Alan and soon for everyone who knew and loved him.

At a school function Alan had a seizure. And there, in front of hundreds of his classmates, teachers and others, Alan writhed on the floor while people desperately tried to help prevent injury to himself during his seizure.

I can still remember the scene as though it was yesterday. This 16 year old boy, on the cold floor of a gym, his body frozen in a seizure and caring hands trying to help him.

He looked so small and lonely.

Yet that wasn’t what troubles me the most almost 40 years later.

It was when the seizure was done and Alan gained his senses and sat up. In front of him were hundreds of eyes staring back at him. Every single pair of them relieved that he seemed okay.

But the pair of eyes that stared back at them were devastated. A 16 year old boy knew that people had seen him in a way that he never wanted them to see. They saw him vulnerable. Exposed. Helpless if not for the kindness of others.

There was judgement in that room that day, and none of it came from the hundreds – but from the one. Alan himself.

On November 25th, 1979 Alan took his life in his bedroom at his home just outside of Fairmount.

I know that had Alan had the support that Jerry Kill and his family had today back then Alan would have grown to be a man whose contribution to our world would have been amazing.

I wish I knew more of what to do then to help Alan more. I know that all of us who knew and loved Alan wished we did, as well.

Which is why I have such a deep and abiding respect for the University of Minnesota and those who stood with and behind Jerry Kill at what I can only imagine were some of his darkest and most desperate hours.

I remember thinking of Alan when I saw Jerry Kill on the ground. Imagining him looking at the thousands of eyes staring back at him, relieved he seemed okay – and the one pair of eyes looking back at them and knowing what they had seen.

It’s why I look at Jerry Kill and I think of Alan. Jerry Kill is only two years older than Alan would have been today had his illness not contributed to his decision to take his own life.

It’s why I think Jerry Kill reminded me again, today, of how much I and the world lost when Alan left the Earth nearly 40 years ago.

It’s why I am so grateful that Jerry Kill and his Family have made the right decision to focus on his health and proud of the University of Minnesota for having had the courage to stand with and behind this profoundly important man in our lives.