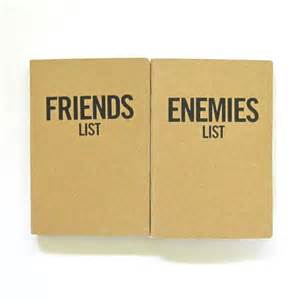 In what seems like yesterday but was longer ago than I wish I was tucking my Daughter into bed for the night.  As we ended our Goodnight routine I casually made the comment, “I’m glad I’m your friend.”

She looked at me very seriously and said, “You’re not my friend, you’re my Dad.”

I am Dad.  Pure and simple.

Particularly in this so-called “Age of Trump.”

It is not true that the press is the enemy of the American people.

Nor should it be true that the press is the friend of the American people.

The job of the American media is to be the 4th estate.  The independent storyteller of the nature of our nation.  The clear line between what our government wants to tell us and what we need to know.  An articulate arbiter of truth versus fiction in a world where it is all too often difficult to tell one from the other.

I have spent much of my adult life dealing with the media.  On a local, state and national level I have engaged with smart journalists committed to their craft.

My job and their job was and is very different.

My job at one point in my career was to paint a picture of those I worked for pursuing policies and actions that we deemed to be in the best interests of the people.

More importantly, my job was to always tell the story from the best possible perspective even if sometimes that perspective may have not always be as obvious to others as it was to us.

At least, of course, from our perspective.

The job of the press wasn’t to simply regurgitate my talking points.  On the contrary, it was to avoid doing so at all costs.

I was one source. They had others.  My perspective was one.  There were those who had others.

The resulting effect was that stories rarely ever turned out 100% the way I wanted, hoped and expected them to be reported.

Any reporter who ever worked with me doing those years would never accuse me of being a shrinking violet.

There were times I vociferously disagreed with the outcome of a storyline.  Angry words and frustration often followed the publication or airing of a story that I felt was off-base and failed to grasp the genius of what I had told a reporter.

But, I never once thought that the reporter was the enemy of the people of the community.

But, I never once considered reporters my friends.

Neither role was or is the responsibility of the press in this country.

Donald Trump isn’t the first, nor will he be the last, President to treat the press as either his friend or his enemy when it comes covering his Administration.

The short memory times in which we live failed to recall that Barack Obama implemented some of the most chilling restrictions and actions upon the American media we’ve seen in decades.

In a previous post, I pointed out that I long ago gave up on the canard that the job of the press is to be objective.

I also don’t believe the press lacks an ideological slant.  The press itself is dishonest when it continues to reject the fact that by and large it holds and presents a perspective from a left of center point of view.

Which is not to say there is not a robust right of center press perspective in America.  There is and there should be just as there is a left of center point of view.

That liberal bias, whether my friends on the right wish to agree, has largely been responsible for some of the most sweeping and positive changes in American life since the founding of our country.

Before my liberal friends start cheering my advocacy for their left-of-center perspective I want to point out that it was that right-of-center media that ended the left’s monopoly on government power in America at a time when it was desperately needed.

One’s ideological bearing, however, is not the great threat to the legitimacy of the America media in the Age of Trump.

The greatest threat to its legitimacy is taking the bait from a man who deliberately goads it.  The larger threat is taking that bait so often that legitimate and important stories are being given short-shrift because there are only so many hours in a day to cover and report on everything Donald Trump does, says or tweets.

He tweets that the press is the enemy of the American people and the press continues to broadcast his accusation against a drumbeat of a hundred other stories they have chosen to present to the American public as newsworthy.

Which, I believe, is a greater threat to the American people.  The cheapening and simplification of the news.

Being informed Americans is the hardest work of democracy.  Voting, for the vast majority of Americans, is the easiest aspect of democracy.

There was a time when far too many Americans very lives were at stake when it came time to vote.

Today, all Americans put their life at stake by not doing the hard work of democracy by being the most informed people we can, and should be, living in the freest nation on Earth.

We do so because being the freest nation on Earth doesn’t just happen or stay that way.

It happened because millions of men and women sacrificed their life, liberty and pursuit of happiness to make it so – and many continue to do so – every day.

It will not stay that way if we believe that our job as Americans is to simply digest that which is fed to us – by our President – or the press – without reading the ingredient list on what it is that we are consuming.

In subsequent posts I hope to expound further on my perspective on what I believe the media must do to regain its effectiveness as the 4th Estate.

This much I will say for now, though.  The greatest threat to America is not its free press.  Far from it.

The greatest threat to America isn’t even believing the President telling us the press is our enemy.

The greatest threat to America is our failure, as the American people, to demand from both our President, and our press, to stop trying to prove to us that they are a better friend to us than the other.

Because the greatest irony of all is that by trying so hard to prove to us that they are our friend they are actually becoming our enemy.