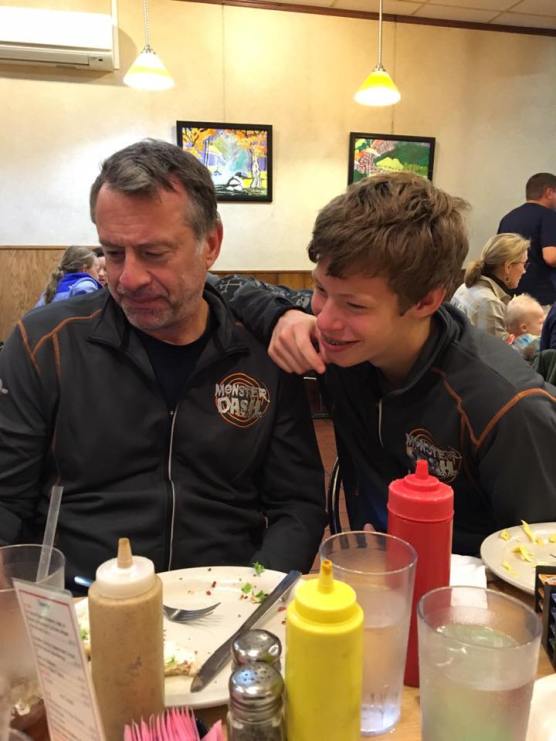 When I was 37 years old my wife and I brought a baby into the world.

We spent a lot of time thinking about what to name that baby long before he showed up.  We also had no idea what kind of a baby we were going to get.

I’ve long prided myself on the fact that I, who loves opening presents more than most children, actually preferred not to know whether we were going to have a boy or a girl.

As anyone who knows me knows I would likely bowl over a small child during Christmas if someone turned to me and said, “Erich, would you like to open all the presents under the tree?”

You would never see anyone move with such swiftness as I upon the utterance of that question.  In my wake would be the tears of children, ripped shards of wrapping paper and the disapproving stares of the adults in the room.

Today that baby has a name.  Owen.

He is 16 years old.  He is often called by other names – most often The Dude.

I am unabashed admirer of my son.

He is my Hero.

Thirty-seven years ago, however, he was, for a not-so-brief period of time my nemesis.

Owen was a colicky baby.

Before bringing him home from the hospital I remember the moment he was born.  My first thought was, “Dear God what have we done?”

Followed quickly by, “What, you want me to cut what?”

Seconds later was this realization:  He had a droopy eye and no chin!

I was mortified!  My newborn baby had a droopy eye but worst of all he was going to be one of those kids that didn’t have a chin on his face.

As I am prone to do I immediately started trying to figure out a solution to this problem.

It may not be apparent but I am not a doctor.  In fact, I have had no medical training of any kind.

To be honest, blood makes me squeamish.  Okay, it makes me weak in my knees.

Fine, I freak out at the mere sight of blood on anybody other than myself!

Hours later my son’s droopy eye began to be less droopy.  And, within a day I was delighted to learn that my son did, indeed, have a chin.

I remember driving The Dude home.  I am sure the people driving behind me still remember that day, too.

I wasn’t going to go any faster than I wanted to.  I had a baby in my car.  My baby.

We got home and very carefully extracted the baby from the car and brought him home for the first time.

Putting him in his crib he looked so, so tiny.  I am sure my wife didn’t feel he was all that tiny bringing him into the world!

Seeing him lie there, peacefully, we both got a bit teary-eyed as we reveled in a new definition of the word “Family” in our lives.

It didn’t take long for Owen to change our life habits.

As a colicky baby he didn’t sleep.  He cried.  A lot.  Purple screams of crying, to be clear.  I don’t know if I have ever seen a purple the color of my sons head when he would go all out crying.  The movie, “Scanners”, had nothing on what my son’s head looked like at the peak of his crescendo of torturous wails.

One couldn’t sit down with Owen.  Before your butt could find a perch he would sense it and begin to wail and howl.

Hours of walking him around the house and the neighborhood made me yearn for a day when he would be older and no longer capable of causing me such distress.

One day I finally collapsed on the couch.  My wife, whose tenacity in feeding and caring for this child was legendary, looked at me with some mix of sympathy and empathy and said,

“Owen has done to you in months what no grown man has been able to do to you in 37 years – wear you out!”

He is a teenager through and through.

He is tall, handsome, smart, witty and, moody.

He is a teenager.

In the whole scheme of things I have to admit his teenage years, so far, have been a challenge but not in a bad way.

The Dude’s teenage years have stretched my parenting skills.  They have required me to be flexible.  To know the boundaries between being crabby Dad and quiet Dad.

Being quiet Dad is a learned skill for me.  It does not come easy.

I want to fix things.  It is my nature.

Not broken pieces of furniture or cars and stuff like that.  I can’t fix crap, to be honest.  I’m more likely to break things worse – and I have.

There are days when The Dude is quiet.  Too quiet for me.

I tend to associate quiet with “What’s wrong?”

He, of course, resists the entreaties by me to open up and share with me what is going on in his life.

I try to respect that.  Some days I don’t succeed.

Some days I feel an obligation to wade fully into the swamp of teenage emotions and risk my comfort level and confront what I believe is a creature that needs to be cornered.

I don’t know if along the way of the past 16 years I have developed a Dudear –yes, that’s right, a Dude Radar.

I think I have.  It still needs calibration from time to time but I like to think I have found some balance between being an annoying Dad and a Dad whose Dudear tells him that somethings off – not quite right.

I am now 53.  With a 16 year old boy and a 14 year old girl in our household it requires me to be more reflective and honest with myself about what I am good at –and what I suck at – when it comes to raising children.

My wife and I are not out of the woods by any stretch of the imagination when it comes to The Dude.

While I am pretty bad at math even I know that there are three more years of “teen” after 16.

I think what is most important for me at this stage of The Dude’s life is the continued understanding that no matter what I am his Dad.

Not his friend. Not his buddy.

There are days when I know Owen doesn’t like me very much.  There are a lot of days when he tolerates me as one of the two adults in the house who have a little money to make sure that he and his Sister get to eat and feel safe at night when they go to bed.

There are, to be sure, days when I know that Owen likes me and finds me useful for things beyond the credit card I have in my wallet.

Those days are great.  But, they are no greater than the days when he doesn’t like me or barely tolerates me.

It is probably the days when he cares the least for me that require me to care the most for him.

I think I wrote this today to remind me of that.

To also remind me that being Owen’s Dad doesn’t ever end.

Even when I am a distant memory in his life I am going to be his Dad.

Owen is my Hero.

I am the Dad of my Hero.

Both are the greatest honors of my life.