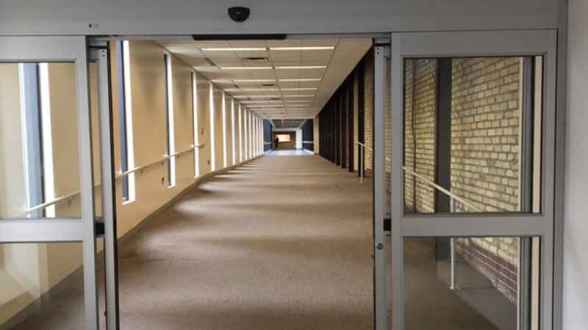 Friday, June 9th began like any other day for me on my way to my office.

I parked my car.

Made sure to lock my doors.

Debated whether I should take a picture of the floor I parked on or if I felt confident enough I would remember it by the time I left for the day.

On this particular day, I opted for confidence.

I chose to take the stairs rather than the elevator and ascended to the skyway floor of the parking ramp to begin my several minute walk to my office.

Barely 100 feet into my skyway journey I saw it.

Or, rather I saw him.

A figure lying right outside the entrance to the skyway.

There was a backpack.  There was him.

This isn’t the first time I have seen someone sleeping in the skyway in St. Paul.

I have seen many people sleeping in the skyway.

Let me rephrase that:  I have seen many men sleeping in the skyway.

Older men. Or, at least they appear much older.

Yet, on this day.  In this skyway.  The man I saw sleeping in the skyway did not seem like a man.

Not much more than a teenage boy.

Maybe not even more than a teenage boy.

It is my initial reaction that has weighed on me since that moment I began to walk by him.

So much of my reaction was my irritation that here, again, was another example of why the skyway system in downtown St. Paul is so unwelcoming and unpleasant for people.

I took a picture of the sleeping figure.

I intended to use that picture of that sleeping person to prove a point that the skyways were not a welcoming place for workers, residents or visitors in St. Paul.

I was completely focused on the point I intended to prove.

About less than 100 feet from him I stopped.

Behind me I saw my son, Owen.

But in the rumpled form of that sleeping figure in the skyway.

He has all the food he needs.  Parents who love him  A sister who adores him.  A dog that confuses him.

All around him is a family that holds him tight in our hearts and mind.

Behind me, though, was some Dad’s Owen.

He wasn’t in a home with food.  In a bed with a blanket.  Or surrounded by people who love him or keep him safe.

He was lying in a skyway.

A chill went through me.

Because in the midst of my irritation and annoyance it never occurred to me that some Dad’s Owen might be laying in a skyway badly injured, suffering or God forbid, dead.

I turned around.  I walked back.

I looked at the figure of a young man lying on his side.

I looked at him for a moment.

…I looked to see if he was breathing.

Unlike my Owen I didn’t poke him or shake him to see if he would move to prove he was breathing and alive.

No answer. No movement.  No breathing.

Just like when my Owen didn’t and doesn’t respond immediately after my poking or shaking or raised voice to see if he is breathing and alive I could feel the tightness in my chest and the discomfort in the pit of my stomach.

I asked louder, and closer, “Hey, are you okay there?”

It was only then that he moved.  And barely rolled over enough for me to see his face and muttered, “Yeah” that I could see this man was not much more than a teenage boy.

In fact, maybe not even more than a teenage boy.

Uneasily satisfied that he was alive and, despite his surroundings, relatively safe, I turned and returned to my route to my office.

I continue to hope and wish for an epiphany.

A revelation that will give me a sign and guidance on what I can and should do to erase the enormous sense of despair and shame I continue to feel about that moment in the skyway.

I feel obligated to do something.

To speak up.  To speak out.

But, to speak up to who?

To speak out to who?

To fix it how?

I don’t know the story of that boy in the skyway.  I don’t know the journey he took that morning that brought him to the floor of that skyway or how he came to feel that the place he should lay his head should be that particular place.

Was it the safest place he could find?

Or, was he simply a kid who was tired and sat down in the skyway and fell asleep without intending to do so?

Was he someone living in crisis?

Or, was he a teenage boy doing something that his Dad or Mom back at home would scold him for if they knew what he was doing?

Along the way of the skyway these past several months I have seen so many people sleeping in the skyway I have lost count.

They are all men.

Men of every age.

But, none of them have been as young as that boy sleeping in the corner of a skyway in St. Paul.

There are a myriad of challenges, problems and issues that impact those who find themselves homeless. Living on the streets.  Sleeping in the skyways.

There are no single causes, reasons, answers or solutions to it.

I know what it is that bothers me and troubles me the most about all of this.

It’s that my Owen’s Dad didn’t do what I would hope another Dad would do if they saw my son laying in a skyway in St. Paul.

I didn’t immediately stop to see if some other Dad’s Owen was safe and free from harm.

I didn’t kneel down and poke that boy.

I didn’t shake him.

I didn’t check to see if he was breathing.

I was too busy being mad about someone sleeping in a skyway.

Which makes me feel obligated to do something.

It’s not somebody else I need to ask to do what I think must be done.

That somebody else is me.