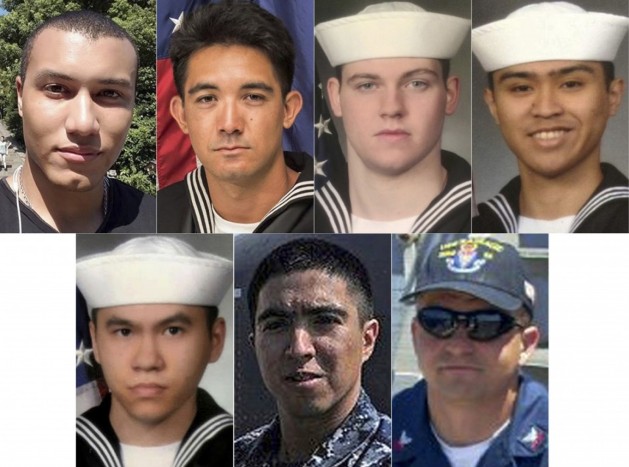 A father’s only child.

A 19-year Navy veteran who adored his wife and sang Karaoke with her in their living room on their Sony PlayStation.

A “quiet, sweet, selfless” brother who wanted to do something “adventurous.”

An 8-year Navy veteran whose family came from poverty in Guatemala and whose family believe he was the one who “made it.”

A son whose mother observed upon learning of his death that “We just borrow this time from God..So now he has to go back.”

These sailors, and the others who make up the seven who lost their lives in the collision of the USS Fitzgerald and the ACX Crystal, a 30,000-ton container ship, each of their own unique American story.

On any given day, their life story would not register anything remarkable on the radar of most Americans.

Yet, upon closer reflection each of them represents the face of something more than the victims of a collision that took their lives suddenly and without compassion.

They represent the face of America.

An America that I hope our President, and those who call for the deportation of millions of illegal residents out of our country, will see in the faces of the seven soldiers whose lives were given in the defense of our nation.

America’s face to the everyday world is not President Donald Trump.

I know it is a popular notion to believe that in every nook and cranny of the world that the America the world sees is the one on television who holds the title President of the United States.

But, it is an untrue one and one that doesn’t understand that America is in the faces of those seven sailors who died on a ship in the middle of the night as many of them slept in their beds.

America is the more than 150,000 American service men and women stationed in foreign nations across the world.

Today’s navy has roughly 94 ships deployed at any given time around the world with thousands of sailors on-board.

They are the face of America around the world.

The Peace Corps and untold numbers of NGOs and companies and non-profits that are doing work and commerce throughout and around the world.

They are the face of America around the world.

I have grown weary of the idea that America’s face in the world is the face of our President.

Whether that face is Donald Trump or Barack Obama.

Yes, it is true, that the President of the United States of America is the single most powerful person on the face of the Earth.

But, the millions of Americans living and serving and working around the world are the most powerful representatives of our values and beliefs everywhere in the world.

Millions of similar faces can be found in America.

Living, serving and working in America.

Millions of them are not American citizens but aspire to become one.

Some of them are the mothers and fathers and sisters and brothers and aunts and uncles and cousins to those who have become American citizens who live, serve and work in America.

And on ships off the coast of Japan who died in the middle of the night asleep in their bed defending America.

Who are we in America if we are not the people who embrace the desires of others who yearn to be free and have a better life for themselves and their children?

I take no issue with the fact that there are millions of people in America who are living here illegally and outside the rule of law in our nation.

It is true.  And, we must create a pathway to citizenship that brings them out of the darkness.

That pathway doesn’t begin on a bus or a train or a plane and a one-way ticket out of America back to the land they fled in fear or in hopes of a better life for themselves and their own families.

I take great exception and issue with the idea that we are a greater nation by demanding their expulsion through the use of force or other means that dehumanize their very existence.

By doing so we are not the nation that is represented by the faces of seven Sailors who lost their lives defending it.

There is virtually no chance that President Donald Trump will read this post.  In the whole scheme of things, it is not likely to make any impact in the world outside of the small number of people who choose to read it.

What’s not okay for me, though, is to let the lives of seven American sailors fade off into the distance without stopping for a moment to reflect on their service to America and my family.

Or to forget that those seven American sailors are America’s face to the world.

May they rest in Peace with the thanks of a grateful nation for their service.