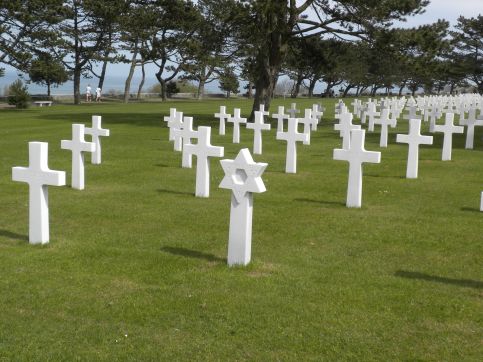 I didn’t expect that moment, walking amongst the tombstones of America’s fallen in Normandy, but when it came I was grateful for it.

Grateful for the freedom I had to walk on the sunny side of the grass with my family in a place where so many young men had come to die.

No matter where I walked, or where I looked, the names of 9,385 American dead surrounded me.

Most who lost their lives in the D-Day landings and the operations that took place after it to liberate Europe from Hitler.

Prior to that moment I had spent hours with my family retracing the hours leading up to what would be the last days on Earth alive that many of those thousands would have as living Americans.

It was a cold, windy and wet day of our tour, much like the weather facing thousands of allied troops as they streamed across the English Channel on June 6th, 1944.

Seventy-four years ago, they came across the water.

Not much older than my 17-year old son who stood beside me as we listened to our tour guide explain the morning of the crossing.

It’s a story I know about.  I have read about it.  Heard about it.  Seen movies and documentaries about it.

But there, on Omaha Beach, with the landing zones of Allied soldiers to my left and to my right, I could close my eyes and try to imagine the terrible sounds of war the moment of their arrival.

We talk of World War II as “The Good War”.

It was a war that was supposed to never happen but the decisions at the end of World War I guaranteed it would.

Twenty-six years after the end of World War I these children of America came to fight, to liberate and for far too many, to die.

The sealed fate of the young men who came across the water that morning was not in the plans of their mothers and fathers when they brought them into the world.

The hopes and dreams of their childhood forgotten as they understood the brutal reality that the boy next to them, in front of them and behind them may soon, simply, be gone.

And, equally frightening, whether more so, or not, I do not know – perhaps their own eternal life minutes away.

Seventy-four years after thousands came ashore, and thousands now lay in a grave in a quiet, somber, reflective and honorable cemetery thousands of miles from where they were born, I broke down in tears.

I moved quickly from the small chapel where my emotions got caught in my chest and turned my head away from my family so they would not see my lost composure.

As I stepped out I stepped right into the names of 9,385 American boys lying in the ground.

I imagine that for far too many of those boys the harsh reality of time has washed away their individual memories.

Parents gone.  Brothers and sisters gone.  Maybe entire families that once loved and cared for them simply gone to their own eternal rest.

The wars that have come since that day has created similar sad and stark reminders of the cost of American freedom and liberty.

Whether those wars and battles were “good” or “just” will be debated and argued about long after anything I have thought about will matter to me or anybody else.

This much I know to be true:  We owe it to every single American boy and girl who gave their life in America’s name to honor their name.

Gone though they may be.  Their names increasingly lost to the ravages of time and the passing of history.

What they did, on behalf of America, need never be lost or forgotten.

For every single picnic.

Every jury of one’s peers.

We are Americans because those who took their last breath on a beach or a field, on the water or in the air, made it so.

Speak their name or speak of their sacrifice today.

Look around you and know that no matter where you are your freedom came with a price.

At work, or at home, at your cabin or in your car, no matter where you are your freedom came with a price.

America’s freedom, liberty and justice for all is not perfect.

Remember the sacrifice of those who we honor today by working to make it so.