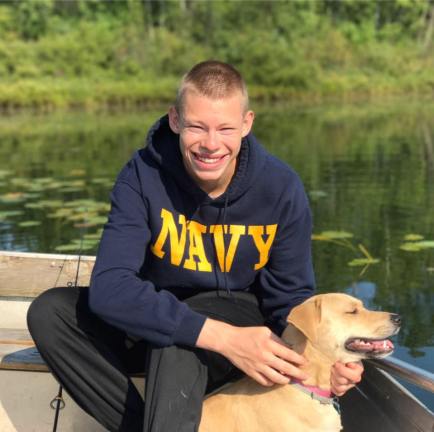 Not much about Owen has ever been easy since he took his first gulp of Earth’s air.

And, I wouldn’t have wanted it any other way.

I look to my left this morning at the wall that has the markings that track his progress in height from the time he was two months old until today – a baby turned boy who has become a man at 18 years old.

Anybody who knows me knows I believe the world needs more Heroes.

Owen has always been mine.

I look at this young man who stands nearly six foot three inches tall and I marvel at what substance there is between that slender frame of a body.

If character was DNA my son would be made up entirely of it.

Even in his faults and missteps and mistakes they have been done with character.

He has a firm belief that his purpose on Earth is to be a voice for those who have none – an advocate for those who are not being heard – and a defender for those who need someone to stand for and stand up for them.

Yet, behind those brilliant blue eyes and that smile that makes you swoon is a mind that cuts as quickly as it can heal.

It has been said about Owen that he is both a sponge and a fountain.

He holds inside his head more knowledge than should be humanly possible.

That he is willing to share it freely and openly and with enthusiasm is one of my son’s most endearing qualities.

Knowing Owen is knowing someone who knows who he is.  Who understands and embraces his qualities and virtues without guile and without pretension.

The kid that bought donuts for himself and then quietly gave them to someone on the corner who was hungry is the same young man helped a boy study for a class – encouraging him – prodding him – and applauding him when he achieved success when he thought it was not in him to find it.

Who spent hours helping a friend study for a test – who doesn’t just wish for good things to happen to others but finds ways to make it so.

Owen has firm beliefs, unshakeable values and a sense of fair play and justice that defines his daily life.

Big or small, Owen understands that what harms one of us harms all of us.

The fact that today, on his 18th birthday, he sees his new found right and privilege to vote in the November Election as one of the most important moments of his life, tells you much of what you need to know about Owen.

Service to community.  To people.  His country.

These are reflections of the inner Owen that he shares with more than just words.

A dear friend of mine has often said there are, in the world, people who care so much about something they almost do something about it.

Owen cares so much and he does things about it.

I’m mindful that my son is a young man.  I am also quite aware he is not far removed from still being a boy.

There is still the glee that comes from boy things and toys that I hope he never loses.

And, gratefully, there are still times, rarer and far less frequent, when I can sneak in a hug and a snuggle and a kiss.

I miss those days when he would forget what he was going to say and would choose to replace his lost thoughts with “I love you!”

The times I would sneak into his room at night and snuggle up to him for awhile and listen to him breathe – and sometimes fall asleep next to him – are but a distant memory.

Soon enough my son will find his place in a world outside our home.

He has worked hard to get to this place in his life.

I am proud of that journey.  It hasn’t been a straight line.  There’s been some detours.  He hit some bumps in the road.

But he never found a wall that stopped him.

I don’t believe he ever will.

And, I am glad they do.  They are the adjectives of a leader.

These are the adjectives of a human being that the world needs more of on this planet.

Owen is a walking adjective of the kind of person I wish I knew when I was young.

He is the kind of person I am proud to know as my son.

We all get to a place in our life when we wonder whether what we have done was enough to make a difference in the world.

Today, I know that whatever it is I have done, or haven’t done, to make a difference in the world the one thing I did right was be the proud father of Owen Mische.