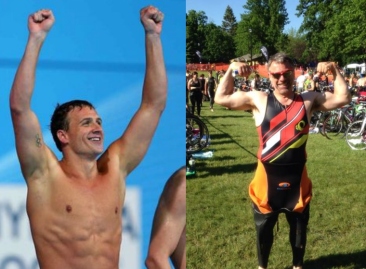 Ryan Lochte and I.

With these four words I’ve begun to create my own little world of adventure, chaos, silliness and incredulity.

Words that I imagine Lochte, if he was predisposed to look them up in the dictionary, would find accurately summarizes the first 32 years of his young life.

Let me be absolutely clear:  Ryan Lochte and I aren’t friends.  I don’t really know that guy.

Okay, I don’t know that guy at all.

Yet, I suspect that guy is far from the caricature that we’ve been treated to when it comes to Ryan Lochte.  Or, from the person I’ve enjoyed gently mocking since the Great 2016 Summer Olympic Bathroom Scandal.

How do I know that?

I just hope that he isn’t as far removed from reality – except on purpose – as we have been lead to believe.

My Daughter watches Pug videos on YouTube for hours.

I have watched Lochte videos on YouTube for hours.

Don’t judge us.  We all have our guilty pleasures.

Some of the videos I have seen of Lochte have made me tear up. Laugh out loud.  Shake my head.

Some of them have even had me chuckling because I sense behind the stoner guy image is a brilliant brand marketer who has carved out a lifelong and lucrative career as a loveable idiot.

But, you all should remember I have a C- intellect, received a D- in Geometry only because the teacher didn’t want to hold me back in his class another year and once thought it amusing to relieve myself on an electric fence without understanding the concept of “conductivity.”

There is, I admit, a fascination with Lochte.  Not an obsession, I assure you.  When you see me with a solid set of six-pack abs, a 28 inch waist and a full head of hair then you can call me obsessed.

In the meantime, my firm flabby stomach, 34 inch waist and gracefully receding hairline appreciates a bit of the obsessive fascination the world had with Ryan Lochte in the aftermath of his party antics at the Rio Olympics.

Somewhere between the booze, his memory, his recollection, his anxiety, his fear and his bemusement, Lochte created an international incident at a time when we should have all been enjoying the actual athletic achievements of the world’s finest athletes at the Rio Olympics.

But, the perfect storm of a bored, instantly judgmental and officious media – an athlete who has never spent much time being publicly introspective – a global audience seeking to be fed its daily dose of entertainment – and public officials in Brazil annoyed at the portrayal of their Olympics as nothing but crime and filth ridden – created Lochte Fever.

If we are all being honest with one another we have nobody to blame for it all except ourselves.

According to multiple different sources, “Ryan Steven Lochte is an American competitive swimmer and a 12-time Olympic medalist, which ranks him second in swimming behind Michael Phelps. His seven individual Olympic medals rank near the top in men’s swimming.”

For all of his zany social media posts, inconceivable media interviews (My salute to the Princess Bride) and head turning quotes, Ryan Lochte is actually an accomplished athlete. He is wealthy.  Good looking.

And, one of the best athletes in his sport in a generation.

Those who have been willing to stomach my daily dose of “Ryan Lochte and I” adventures know, I assume, that Ryan Lochte and I have not been fishing, swimming, partying or hanging out together.

What they may not know is that behind those adventures lies my own measure of commentary on the human condition we find ourselves in, in this day and age.

Our world view has been so decidedly altered by the crush of information, speculation, accusation, misinformation, transmogrification, condemnation, heroification and vilification.

Or, as I prefer to call it, Lochtefication.

Really, truly, what difference did Ryan Lochte’s immature party junket with three of his friends one night at the Rio Olympics actually make?

If not for Al Roker and some other guy I don’t know getting into an argument about whether Lochte lied or not – and the indignation of the media that they had been “mislead” by Lochte – this would have been nothing but four boneheads having had too much to drink making up a story to share with their buddies.

Lochte’s problem was he ran into some reporter instead of a houseful of frat boys that he could regale with his evening’s conquest with a soap dispenser and a gas station bathroom.

Our problem is that the media convinced us that this was a problem.

Our bigger problem is that we allowed the media to convince ourselves that this was a problem.

And, in doing so further distanced our lives from a meaningful analysis of the real life challenges and opportunities that we should be focusing on, instead.

I think it speaks volumes that barely a month ago Ryan Lochte dominated the lead story in virtually every major news cycle for days.

Now that he has been suspended and fined for his behavior the story has become simply an afterthought.

The Lochte Episode is not unique.  It is ubiquitous and pervades virtually every aspect of our lives now.

Lochtefication surrounds us.  Distracting us from things that ought to terrify us as well as delight us.

The world is neither as bad as some have said it is, nor is it as well off as others suggest.

But it’s nearly impossible to see the forest for the trees when we are constantly being triggered to chase the next shiny object of something that someone says we should and must consider urgent, important and world altering.

Wow, did you just see that squirrel in that tree?

Ryan Lochte and I.  For President and Vice President.

Damn it, I was just Lochtefied!