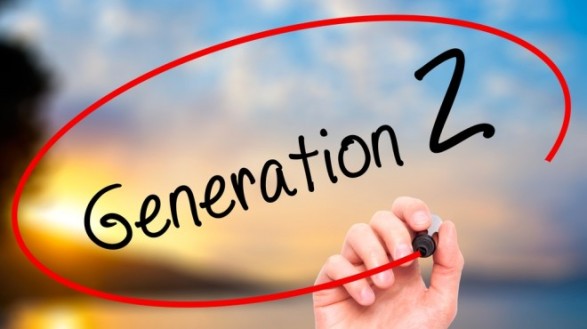 According to Forrester Research I am a Baby Boomer.

To be honest that makes me feel older than telling people I am 54 years old.

Baby Boomers, based upon Forrester’s definition, were born between 1946 and 1963.

So, while I am on the outer fringes of that age range there is no question that I am, indeed, a Baby Boomer.

Don’t get me wrong.  I am quite okay with being 54 years old.

I own the years I have had behind me and I am eager for the years ahead of me.

It’s a real question for me, though, what obligation do I have to bridge what I see as a tremendous gap between my generation and that of my children’s generation.

Both of my children are being lumped into the category of Generation Z.

In between our generations falls Generation X and Millennials.

Honestly, I quit trying to figure out what it means to be from either of those generations after about three hours of online research.

Here’s what I do care about, though.

What does it mean for my children to be members of Generation Z.

Here’s what I know about the members of Generation Z that live in my house.

Both of my children were born at a time when social media and technology were well into their ubiquity in American life.  It was clear that my era of a typewriter and paper were long gone by the time my kids showed up on the scene.

The cartoon show, The Jetsons, is far more a reality for my Generation Z children than it was for me when I was a child sitting in front of the t.v. watching the show.

Today, much of what that show, and others like it, touted as “the future” is not just my kid’s reality today but “the future” for my kids really are things like flying and driverless cars, single person aircraft and AI as a looming moral and ethical dilemma in their lives.

Technology is their connection to every aspect of their lives. Not in the same way Facebook and Texting became during the generation that preceded them but in a way that it is a tool for the world they are creating, not the world they are living in.

Diversity is a given:

During the debate over gay marriage in America my kids shrugged their shoulders and asked, “Why does anybody care who anybody loves?”

I imagine years from now, when both of them are my current age, they will shake their head in wonder why any American should have been given a better shake – or worse shake – in life because of who they loved, the color of their skin, their gender or any other trait given to them upon their creation inside the womb of their mother.

If ever there is a reason to believe that children are not born to hate anyone because of who they are as a creation of God my hope is that my children are examples of that truth.

My kids are annoyed by people (mostly me) but it has nothing to do with that person’s existence as a human being.

My kids are increasingly convinced that government, in particular, as an institution is broken in America.

My son thinks other institutions are broken, as well, especially school but he is a teenage boy so I discount some of that as being a teenage boy.

Clearly, however, both my son and daughter look at government as not being an institution capable of solving the challenges of today or the future – big or small.

Nor do they believe it is equipped to manage the opportunities that ought to be embraced for their generation and futures generations after them.

They see what doesn’t get done at a local, state and national level and shake their heads.

America is great but not perfect:

Tied into their belief that government is broken is their strong feeling that the United States is a nation worth believing in, fighting for and defending.

But, they also see America as an imperfect reflection of its grandiose ideas and purpose.

They see racism, sexism, classism and anger and hatred and hurt and pain and suffering and they know America can be better.  That it has been better.

Their perspective on their country is not one in which its best days are behind it but ahead of it as soon as they get their hands on it.

Giving back is real not virtual:

They see it through the hard work of rolling up their sleeves and pitching in with real people to make life better for real people.

While both of my kids will laugh out loud at the biting rhetoric of Oliver and Stewart and any number of other pundits they also know that words have their limits when it comes to changing the world and that clicking “post” or “tweet” is a statement of purpose not an execution of it.

A good book is made of paper not glass and plastic:

Finally, what I see most in my kids is their belief that America needs more leaders.

In their mind consensus and collaboration is not leadership.

Leadership is finding ways to build consensus and collaboration.

My Daughter is emerging more and more each day as someone who has found her voice in a world in which all too often too many Daughters have been told to wait their turn.

She won’t wait for anyone to give her permission to be a leader.

Nor does her brother.

Which is, when all is said and done, what I think America needs more of each and every day.

People who take risks.  Who have an opinion.  Citizens who understand their role isn’t to stay inside four walls and shout into a social media platform and then turn away from the screen satisfied that they have done their part to save the world.

I have told anyone who will listen (probably a lot who would rather not) to my belief that America’s Greatest Generation isn’t exclusive to any single generation.

This isn’t to take away anything from what we have often come to know as The Greatest Generation in America.

It is to honor that Generation by recognizing that America’s best days – and its best generation – isn’t behind us.

It’s ahead of us.

And, for that we should all be confident in the knowledge that Generation Z will, itself, someday, create the Greatest Generation.