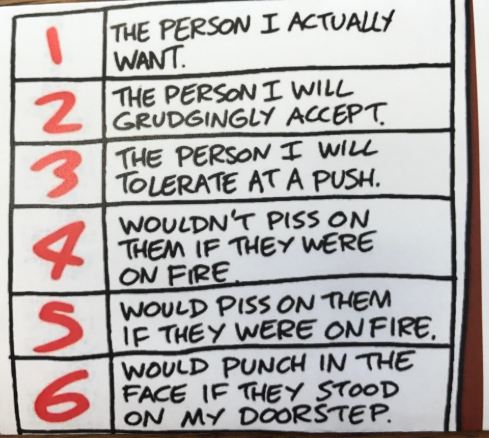 Yes, it is true that in my most recent blog post about the St. Paul Mayor’s race voting abomination called “Ranked Choice Voting” or RCV, for short, I did write that you could vote for Pat 10 times.

In fact, even if you could vote more than once in RCV you can only vote six times for Mayor.

Not 10 times – even though there are 10 separate candidates.

In Minneapolis, there are over 20 candidates.

But, you can only vote three times for Mayor in Minneapolis.

Saint Paul is not, mercifully, Minneapolis.  Which is completely beside the point and I apologize for making you read the last couple of sentences as though they were pertinent to this blog post.

But, if your first and only choice for Mayor is Pat Harris.

For those of you requiring Monty Python to explain this, let me take the liberty of paraphrasing from the movie The Holy Grail

“First shalt thou take out the Holy Ballot Pen. Then shalt thou count to one, no more, no less. One shall be the number thou shalt count, and the number of the counting shall be one. Four shalt thou not count, neither count thou zero  excepting that thou then proceed to one. Five is right out. Once the number one, being the first number, be reached, then lobbest thou thy Holy Ballot Pen of Saint Paul towards thy ballot, who, being Pat Harris in your sight, shall accept it.

While I often believe I am more clever than I really am (just ask my children) I should have put a finer point on my satire from yesterday’s post https://mischellaneous.com/2017/10/12/if-pat-harris-is-your-candidate-for-mayor-vote-for-him-once-ten-times-in-a-row/

In not doing so I may have led those who support Pat Harris to believe that instead of voting for other candidates, other than Pat, they could actually cast their vote 10 separate times for Pat.

You cannot.  In not doing so I may have led those who support Pat Harris to believe that instead of voting for candidates other than Pat they could actually cast their vote 10 separate times for Pat.

If you believed you could and now you believe you cannot and that bums you out and makes you want to punch me in the face.

I am sorry you may be bummed out.

I am not sorry you can’t punch me in the face.

Part of my point in my previous blog post, besides outlining my support for Pat Harris, was to effectively use satire to underscore my opposition to RCV.

The fact that this Mayoral election has done virtually nothing to engage the broader electorate of St. Paul is – another – indictment on the fallacy of RCV to increase democratic participation.

The Saint Paul Pioneer Press does a good job today outlining the very concerns about lack of interest in this year’s election and that one of the reasons may well be the problems caused by RCV:

And, I will cast only one vote for Mayor.

If you believe that you have a choice before Pat, but Pat would make a great second, third, fourth, fifth or sixth choice, by all means cast that vote for your first choice – and then make Pat Harris whatever choice you believe he merits for your other votes.

If that made your head spin and I have confused you further then here’s a simple solution.

And, only one vote.

Cast that vote for Pat Harris.

And, punch Ranked Choice Voting in the face.